Select your location to view local American Lung Association information near you.

Enter your zipcode
or
Select your state

Wildfires Changing the State of Our Air

When you think of Montana, you probably think of wide-open spaces, high plains, big sky country and presumably fresh, clean air. But the American Lung Association's 20th annual "State of the Air" report finds something unexpected—increasing air pollution in the "Big Sky Country." The culprit? Wildfires driven by climate change. Montana is just one example of how unchecked climate change is increasing air pollution levels and putting the health of more Americans at risk.

Each year, "State of the Air" provides a "report card" on air pollution all across the nation. This year's report reviews data collected from air quality monitors from 2015 to 2017, and focuses on the two most common and harmful types of air pollution: ozone (smog) and particle pollution (soot). Montana's 2017 fire season was number one in terms of acres burned, and according to reports, probably the largest in more than 100 years. The smoke from wildfires is a powerful source of harmful particle pollution, and 2017's record 1.4 million acres burned had a major impact on Montana's air.

So where does climate change come in? According to a report by the Montana Department of Natural Resources and Conservation (DNRC), the wildfire season was extremely hot and dry throughout the entire season, and fires occurred across the entire state. All three years included in this year's "State of the Air" ranked among the hottest years in global history. The rising temperatures related to a changing climate contribute to droughts, which cause more severe and longer wildfire seasons. In fact, as early as June in 2017, the Governor of Montana had to declare a drought emergency in 18 counties.

"Montana is almost a test case in how difficult it is to maintain improvements in air quality," says Ronni Flannery, Director of Advocacy for the Lung Association's Healthy Air Campaign, in Montana. "The eastern part of the state does indeed enjoy fairly clean air. But western Montana, like Missoula where I live, has a complicated air quality history, to say the least.

"Western Montana is now in its third wave of battling particulate pollution. First, there were heavy industrial emissions from factories, which the original Clean Air Act improved. Then in the late 1970s, high oil prices made many people switch to wood for heating fuel—a very high source of air pollution. A series of local and state laws helped clean up the dirtiest wood burners, and things were better for a while. Now it's wildfires. We'll have to address climate change to reverse this trend of longer and more severe wildfire seasons," Flannery explains. 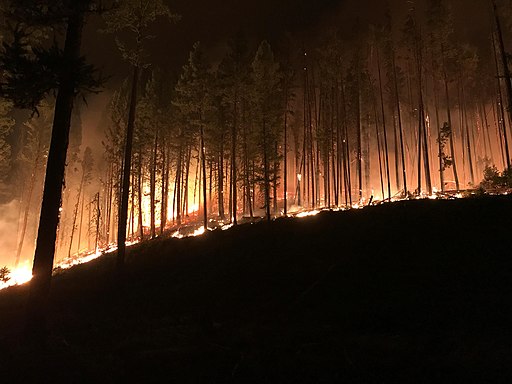 For example, the town of Seeley Lake, near Missoula, suffered severe fires and consequently had 35 more days of hazardous air in this year's report. Some days, the air was so bad that the air quality monitors were "topped out" and couldn't measure it. The health impact of days like these is serious and lasts longer than expected. In fact, a University of Montana study found that residents impacted by the devastating Rice Ridge Fire showed reduced lung function a full year after the fire.

"This is not just a Montana issue," says Flannery. "Heat and droughts from climate change are making fire a threat across the country, including increases in places like California, Georgia, Florida and more.  We must protect the Clean Air Act and defend its power to address the pollutants that drive climate change."

How you can help:

Join us in our fight for healthy air

Is a wildfire near? Here’s how to protect your lungs!

See more tips about protecting your health during emergencies and natural disasters.

For those with asthma or COPD:

Create an Asthma or COPD Travel Pack. Those with chronic lung disease are encouraged to gather all of their medications, delivery devices, prescriptions and insurance cards in one spot so that can quickly be transported in the event of an evacuation. A Travel Pack could include:

We’ve partnered with Dyson to bring you this important information and to provide air purifiers to communities hardest hit to reduce the amount of particle pollution in community spaces and homes. The American Lung Association appreciates Dyson’s support as we continue to help communities affected by wildfires.

You must be logged in to leave a comment. If you are new to the site, complete our quick Registration Form to create a User Name and Password.

Sign up for the latest lung health news sent right to your inbox.

Thanks for joining us in the fight for healthy lungsWe look forward to keeping you informed about vaping and e-cigarettes, and sharing the latest lung health news with you.

Sign up for the latest lung health news sent right to your inbox.

Thank you for joining our online community!
We'll be in touch soon with news, resources and stories about lung health.

We need your generous support

Make a difference by delivering research, education and advocacy to those impacted by lung disease.

What is LUNG FORCE?

LUNG FORCE unites women and their loved ones across the country to stand together in the fight against lung cancer.

Give today and your tax-deductible gift will go TWICE as far for everyone who struggles to breathe.